‘Bring me back an orange’

When I saw the small toy-ish looking plane my nephews would play with I thought to myself, this must be the plane for the luggage. So where was the plane for the 50 odd passengers around me? Oh wait, this was the plane! No joke, the plane was tiny and so flimsy looking I couldn’t help but think how this method of travelling would be safe. It still wasn’t late to back out and catch a train but no one else around me looked nervous which was a good sign. Plus I’d look like a drama queen and a right wuss. I hopped on the plane along with the others and the flight was unbelievable. There was so much turbulence I wanted to get to Valencia as quickly and as safely as possible. And I did. Note to self: Never ever put yourself through that again!

I was greeted by Marco (27), my new Airbnb housemate and later on by another lady in her 60’s who didn’t understand a word of English. There was also another man in his 50’s living in the apartment too but I never bumped in to him, not even once. I’m not ageist or anything but I’m used to staying with a bunch of lively, energetic and happy people in their 20’s and 30’s. I highly doubt the lady would hit the Valencia town with me, she just wasn’t that kind of a 60 something year old. In fact she told me off twice in Spanish with hand gestures so I could understand her. Once for going into her room accidently as I kept getting the two rooms mixed up and second for wiping my hands with a bathroom towel which I thought was communal but was actually hers, whoops! It wasn’t really the sort of welcome I was used to. I did feel awkward but when I bumped into her next we had our Spanish/English chit chat trying to make out what each other was saying and somehow managed to make each other laugh which was sweet. I was finally in with her 🙂 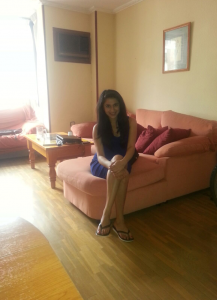 If I’m completely honest I’m not sure whether I was really feeling Valencia. I didn’t fancy it as much as I fancied Madrid and Barcelona. There was a slightly different vibe and energy about the place. An out dated vibe. It could have been the area which I stayed in but I didn’t get the feeling of oh, I’d love to live here.

The city of Arts and Sciences. This famous building below is L’Hemisferic which represents the eye. ‘Eye of knowledge.’ Stunning architecture. 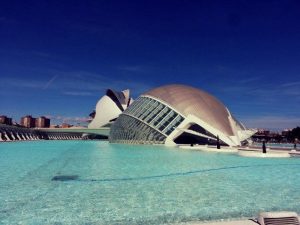 I bought tickets to go and see L’Oceanografic. It was really interesting gaining an insight and knowledge about the world we live in today. The place is very kids friendly too and I would recommend to anyone visiting Valencia. 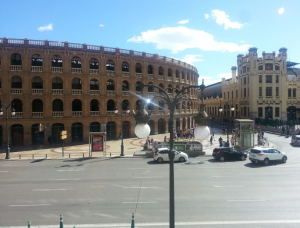 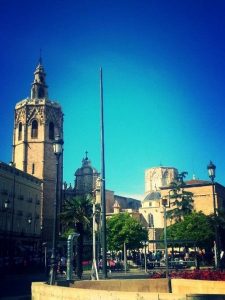 Valencia is very clean. The streets are long and never ending and as always a very convenient metro which is easy to use.

I stayed in an area where there were a lot of tattoo parlours and pretty much every youngster had their columella pierced like a bull. I’m all for culture embracing but don’t worry I wasn’t tempted to come back with one! 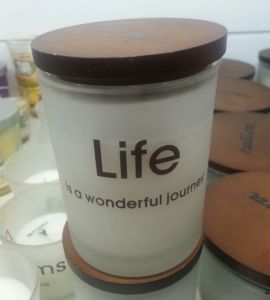 I think I must have read somewhere that calamari sandwiches is a popular thing in Spain. So me being me I had to try it! Calamari and bread separately is fine but together got dangerous. I don’t know how this even happened but I took a generous bite and probably didn’t chew the calamari simultaneously in time with the bread. When I went to gob it down I managed to swallow the bread but the calamari was half way down my throat and half hanging in my mouth. I had to put my finger down in my mouth and gob out the calamari into the bin next to me. Luckily this place was empty. Will I be having calamari sandwiches again? Probably not.

If there’s one thing that I will go back to Valencia for it will be for the traditionally famous conejo y pollo paella. I cannot begin to tell you how deliciously, perfectly, tasty this dish is. I still think about it wishing I could be in Valencia right now eating! I first tried the paella at one of the strip of restaurants by the beach which served paella for one (20 euros). (Usually paella is served for two or more). I then found a café/restaurant nearby where the locals go and the conejo y pollo paella tasted just as good for around 4 euros. My mouth is watering just thinking about it. 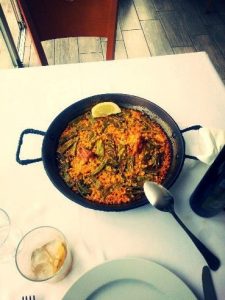 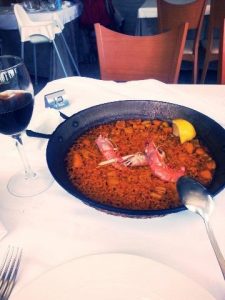 The poshest looking croquette I ate in Spain. 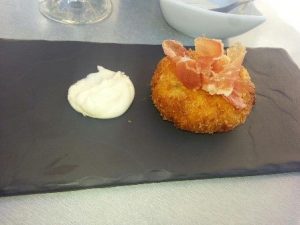 My friend whatsaaped me – ‘bring me back an orange,’ when I thought oh yes! Valencia orange. They looked fabulous but if I’m honest they tasted like any other orange to me. I will put it down to the month April. Off season. 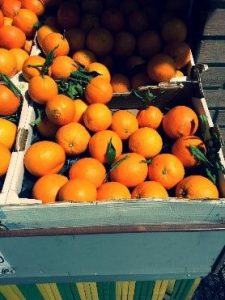 Just because you’ve booked a flight back home doesn’t mean you always gotta go! For some reason I wasn’t satisfied and wanted to experience more so I booked blablacar – www.blablacar.co.uk (thanks to Marco) to travel to Barcelona for just 20 euros and of course I booked another Airbnb accommodation. This is what I whatsaaped my brother and sister in our whatsaap group hehe! 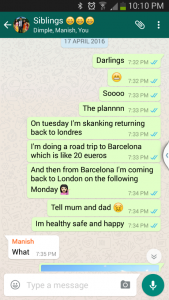 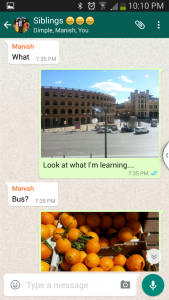 Don’t’ worry Manish isn’t usually this slow haha I think he was just trying to take it all in.