As you may already know from my Valencia blog I booked blablacar to travel to Barcelona for just 20 euros! This is another genius idea, revolutionary, if not already. You basically register on to the site, type in your from and to city (in my case Valencia to Barcelona) and then select a driver who will also be going en route in the same direction. Easy. It’s almost like hitchhiking but much safer and a professional way of doing it. You can check the driver’s profile plus reviews on the website and payment is made after you have been dropped off to your destination. Blablacar works really well in Europe as driving from one country to another is no big deal. Tom – my driver was going back home to France from Valencia (8 hours’ drive) and he also picked up Maria on the way through blablacar. The advantage of travelling like this is that not only do you meet new people but the scenic routes are just incredible. We passed through villages, mountains, hilly streets, a beach. It ended up being like a road trip with friends. I got to Barcelona in 3 hours, it might have seemed like a long ride but I honestly did not feel it at all and it beat a turbulence journey any day. 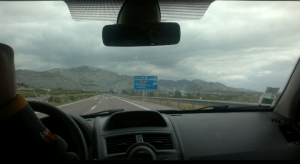 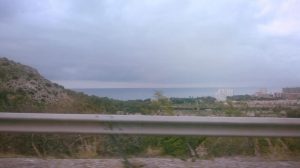 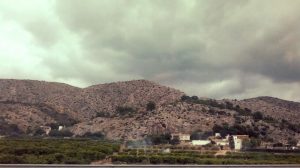 I stayed with a Brazilian family near Park Guell (Gaudi Arts). 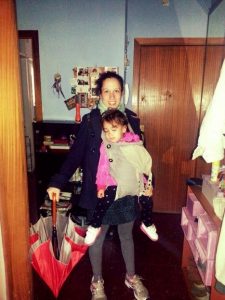 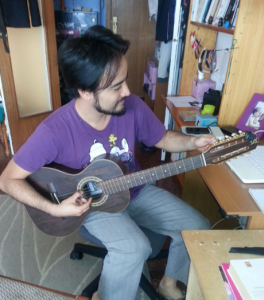 This is one of his album. 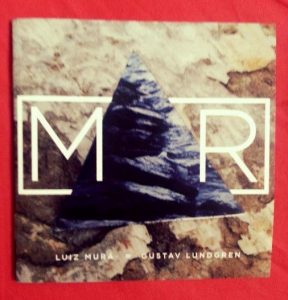 …. And baby Liz (Portuguese and Spanish speaking baby). Liz is the cutest. When I walked in she kept asking her parents ‘who is that?’ in Portuguese. Later on I read her a Spanish story and she kept saying ‘otra vez otra vez’ which means again again. That Spanish word is now embedded in my brain. 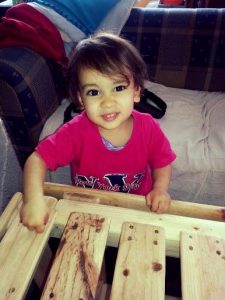 The stunning views from the apartment by day… 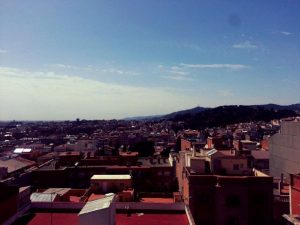 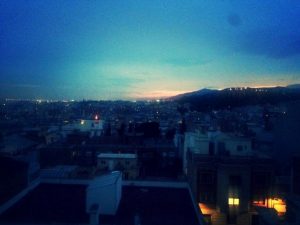 I messaged my Madrid friends to be like guess what? I haven’t left the country yet (lol) and the couple I stayed with were like guess what? We’re planning a Barcelona weekend. We quickly arranged to meet each other for lunch the next day. 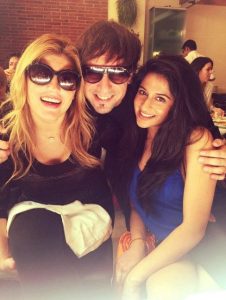 We met at a restaurant by Barceloneta beach with more of their friends and decided to explore Barcelona together. 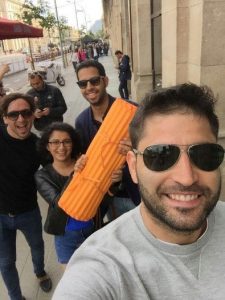 I look so tiny! 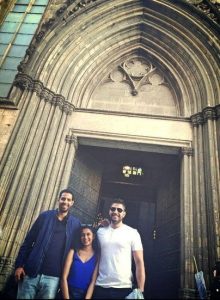 I visited Park Guell on one the days and the family I lived with had a neighbourhood pass so I managed to get in for free. 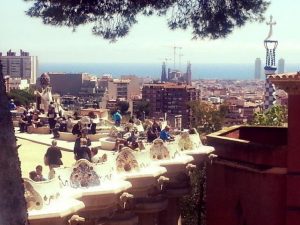 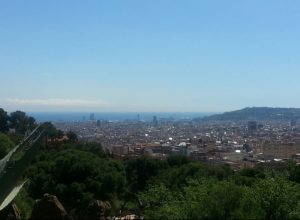 Why do we not have a SEPHORA in London already? You can even get your eyebrows waxed from the benefit counter!!! 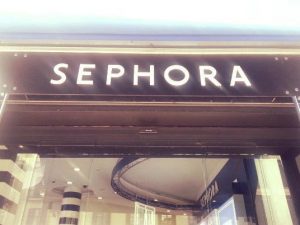 Adrian my makeup artist (in the pic below) at Sephora gave me a little make over and some fab makeup tips. *Purple pencil eyeliner for under the eyes* but I still prefer blue as it makes brown eyes really stand out, especially with black mascara. Try it! 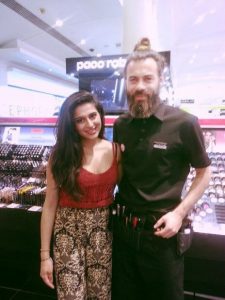 I’m not a huge fan of Desigual (Spanish clothing brand) but opposite Barcenoleta beach as you walk towards W hotel there’s Desigual headquarters. It’s roughly about the size of an airport. So if you’re interested in working by the beach for a trendy Spanish brand then get applying! 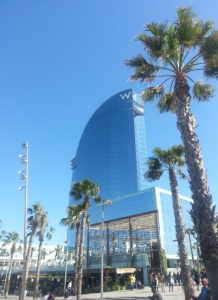 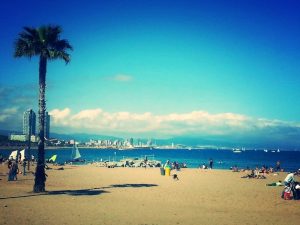 I went back to the café I ate my desayuno in every morning when I first visited the city. I wanted to say ‘hello’ to the lovely waiter I bonded with 8 months back and hoped he was still working there… And he was J It was so good to see him again and I had a café con leche by the counter with him whilst he was doing his shift. I told him during my first visit that I’d be back but didn’t realise it would be so soon. 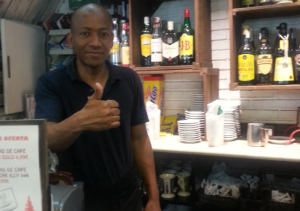 Vending machine in one of the metro station. I mean who needs a corner shop? 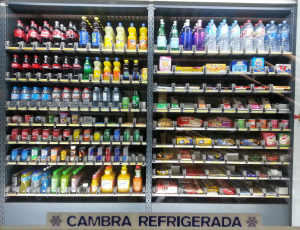 I think my Brazilian family must have sensed that I was a foodie. In the morning one time Luiz came into my room with a slice of cake, ‘would you like some home baked cake? Paloma made it with organic ingredients.’ Ermmmm YES PLEASE! Now that’s what you call room service! They were always so hospitable and always offered me lunch and dinner if I was around. I tasted Luiz’s homemade pasta which was delicious and Paloma’s Brazilian rice dish with beans. She drizzled oil over her rice and Luiz explained how it’s a ‘Brazilian thing,’ they put oil in everything. This is funny because the Indian equivalent is ghee. Indians love their ghee and put it in everything.

I never thought I’d be one of those typical Indians that misses Indian food abroad, but I did. I was in Spain for over ten days and tapas after a while became repetitive. I needed a change, something spicy with lots of flavour. My friend who lived in Barcelona previously recommended Moti Mahal. There’s a Moti Mahal in London (Covent Garden) and I thought it must be a chain but it’s not. This restaurant is completely different. A family business run by Indians originally from Delhi. 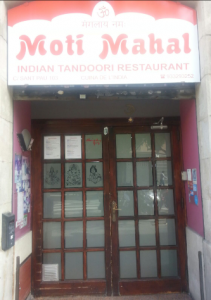 On the menu for me was okra curry, chapati, vegetarian biriyani, khadi (yellow gujarati dish you have with rice, chapati or on its own) and a cup of chai. It definitely ht the spot. 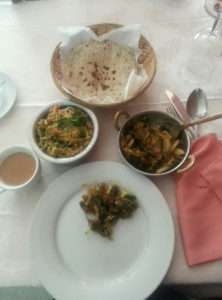 I found out that my Brazilian family love Indian cuisine and Luiz said the last time he had Indian food was about two years ago. This only meant one thing! Indian dinner party, on me! The next day I told Paloma not to worry about cooking dinner and I went back to Moti Mahal. I ordered two different types of chicken curries, a vegetarian curry, naan bread, vegetarian biryani and plain white rice. 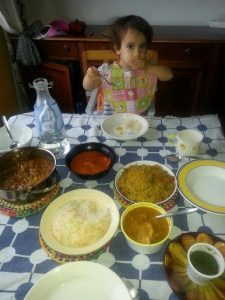 The meal went down really well with great conversations. There was heaps of food left over which they enjoyed otra vez the following day. 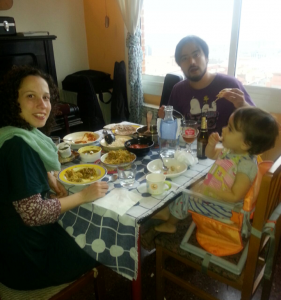 I had a strange feeling come over me in Barcelona as if there was something missing. I was hopping from one restaurant to another, exploring during the day and continued enjoying during the night, yet my life seemed meaningless as if all of this doesn’t matter. What I realised is that I needed to have a genuine purpose in life to be fulfilled and I didn’t feel like I had one. I could have maybe travelled to another Spanish city but it would not have solved what I really felt deep down inside. It was my time to return home and make that ‘change’ as advised by the lady who I first met on my flight to Madrid.